Flight information for trips operating in and out of La Paz including all trips to Espiritu Santo Island and Whale Watching in Magdalena Bay. Ideally you want to fly in and out of La Paz (LAP) for the above trips. As of December 2020, there are limited flights on American Airlines from Dallas and Phoenix with hopefully more hubs coming in the future.

If you don’t find a good option into LAP, the most common alternate way to get to La Paz is to fly to San Jose del Cabo (SJD) and take a 3 hour shuttle to La Paz. Numerous airlines fly direct between US and Canadian cities and the airport in Cabo (SJD) at reasonable rates. Cabo is also referred to as Cabo San Lucas, Los Cabos and San Jose del Cabo (where the airport is actually located). Some of these airlines include Alaska, American, Continental, Frontier, Delta, Virgin America, WestJet, United and US Air.

Inexpensive, direct flights on the Mexican Airlines of Volaris and Calafia Airlines can be found between Tijuana, La Paz and Loreto. The Tijuana Airport is located just across the Otay Mesa, US/Mexican border about 35 miles east of the San Diego Airport. A modern and efficient bridge called the CBX (Crossing Border Xpress) was built in 2015 to provide ticketed passengers from the US a means of efficiently crossing the border directly into the Tijuana Airport for flights from Tijuana to various destinations in Mexico and visa versa. The CBX has secure parking on the US side if driving. On certain days it is possible to fly from various cities in the US to San Diego, transfer from the SD Airport to the CBX (this takes about 40 minutes), cross the border using the CBX (about 15 minutes), then fly from Tijuana direct into La Paz or Loreto (1 hr, 45 minutes). We have personal experience using the CBX so if you would like more information regarding this process please contact us.

The primary direct flight between the US and Loreto (LTO) is from Los Angeles (LAX) on Alaska Airlines (800-252-7522). We suggest you start here with your flight search using one-way flights. For example, if your trip begins in Loreto (Baja Coast trip) you should search for one-way flights into Loreto or if it ends in Loreto (Island Hopping trip) search for one way flights out of Loreto.

If you are not having luck finding an economical, efficient flight in and out of La Paz, then the next option is to fly in or out of Cabo and take a 3 hour shuttle to or from La Paz. Numerous airlines fly direct between various US and Canadian cities and the airport in Cabo (SJD) at reasonable rates. Cabo is also referred to as Cabo San Lucas, Los Cabos and San Jose del Cabo (where the airport is actually located). Some of these airlines include Alaska, American, Continental, Frontier, Delta, Virgin America, WestJet, United and US Air.

Hint for Purchasing Flights:
Most airlines now sell one-way tickets for half or even less than a round-trip ticket. Do your flight search by dividing your trip into two one-way tickets. For example, you can fly into Cabo and out of La Paz or visa-versa for any of our La Paz trips. You can fly into Loreto and out of Cabo for a Baja Coast trip, or into Cabo and out of Loreto on our Island Hopping trip keeping in mind transportation between Cabo and La Paz is reasonable and simple (info above). Transportation between Cabo and Loreto is farther and more complicated but also feasible (info above under Ground Transportation). One-way tickets give you the flexibility to find the best deals and connections.

Other Options:
There are several Mexican airlines that serve La Paz and Loreto via connections through mainland Mexico from several US cities. These flights almost always take more time due to the connections flying through Guadalajara and Mexico City.

There is an inexpensive, reliable and efficient shuttle transport service with EcoBaja Tours that departs the Cabo Airport (SJD – San Jose del Cabo Aeropuerto) 6 times daily for the La Paz Malecon. This shuttle costs approximately $30/person one-way and takes 3 to 3.5 hours to reach the location of the La Paz Malecon (waterfront promenade). From there, it is only a 5-minute cab ride to our hotel. This same shuttle service departs the La Paz Malecon several times daily starting at 6:30 AM arriving at SJD by as early as 10AM for departing flights out of SJD – Cabo Airport. For the most current shuttle times and to make a reservation go to www.ecobajatours.com

Some things to note when making your reservation with EcoBaja.  Their dates are listed in this order: year, month, day. For determining what time you should select for your shuttle, this is our recommendation: your shuttle time should be AT LEAST an hour after your flight arrival at the Cabo Airport, closer to 2 hours will give you plenty of time to get through customs. If unsure, we recommend picking a later shuttle. EcoBaja will allow you to take an earlier shuttle if there is space available. For the return, you should arrive at SJD at least two hours before your departure.

Please note the Ecobajatours.com website can experience glitches. If you feel this is happening, our suggestion is to wait a few days and try again. DO NOT make a reservation unless all of the information is correct. It is VERY difficult to change and impossible to get a refund. However, please be assured that their service on the ground once in Baja is impeccable!

** Update: Ecobajatours has in the past advertised free hotel drop off. At the airport, please inform the driver that you will be staying at our hotel, Posada LunaSol, to (hopefully!) be dropped directly.

For private shuttles in and around the cape between Cabo and La Paz or other places (Cabo Pulmo, Todos Santos) we recommend the transport company Dos Mares. We have been using them for many years with high praises from our clients on their professionalism and efficiency. For rates and information contact them directly at ttdosmares@hotmail.com or ttdosmares@gmail.com. They speak English and are very prompt in responding to inquiries. Phone Numbers: (624) 17 4 15 24 / (624) 12 2 47 49 / (612) 15 9 01 08.

Public Bus and Shuttle Transportation between the Cabo airport, La Paz and Loreto

There is also the option of combining the public shuttle service (EcoBaja, link above) with using buses (Autotransporte Auguila, link below) to travel between Cabo, La Paz and Loreto. This often requires an extra day with an overnight in La Paz. For example, you can arrive in Cabo and take the EcoBaja Tours shuttle (see above) to La Paz (3 hours), overnight at our hotel in La Paz then take the 5-hour bus ride (includes a 20 minute stop in Constitucion) the next day to Loreto, arriving by early afternoon. This also works in reverse if you are traveling from Loreto back to either La Paz or Cabo. The bus departs Loreto daily at 8AM and takes 5 hours to reach La Paz. This bus is a full size, first class vehicle, usually with a bathroom and a comfortable way to travel between La Paz and Loreto. Cost about $50-60/person each way.

If you are already in either Cabo San Lucas or San Jose del Cabo, you can take a bus to La Paz from the local bus stations. Please allow plenty of time and flexibility and keep in mind they can be very crowded during Mexican Holidays (around Christmas and Easter). For information on the Autotransporte Auguila bus service for Baja, click here. To alleviate any stress of buses possibly being cancelled or full (especially around holiday times) you can hire a private shuttle as described above, but keep in mind this will be more expensive.

It is also possible to rent a car and drive to La Paz and return or drop the car in La Paz. Prices vary and all the major car rental agencies are represented in Cabo and La Paz.

If driving up from Cabo there are two options: You can drive through the mountains up the east coast via Los Barriles or the west coast via Todos Santos (TS). Both routes take about 2 1/2-3 hours depending on stops and traffic.

If leaving from the airport (which is north of Cabo San Lucas) and taking the west coast route follow these initial instructions; From the airport follow the toll road (this will cost you about $5) south then west following signs to Todos Santos. The highway will take you up the Pacific Coast into TS. Just keep following signs through TS for La Paz and this highway leads to the following instructions below.

If leaving from Cabo San Lucas it makes the most sense to go through Todos Santos. Follow signs for TS.

Upon arrival into La Paz you continue on the main highway 1 into La Paz following signs for the Malecon (the La Paz water front promenade). Highway 1 becomes Forjadores St. From the first street light you encounter to your first turn you will go approximately 8 kilometers (5 miles) over many speed bumps and intersections passing Office Depot on your right about half way. When you see a large grocery store named Aramburo on your right get into the left lane and turn left at the next light onto 5 de Febrero St. (there is usually no street sign here). After turning you should immediately see McDonalds on your right. Travel north on 5 de Febrero for approximately 5 kilometers (2-3 miles) until you can see the water of the bay of La Paz directly in front of you. At this point you are at the intersection of 5 de Febrero and Abasolo street light with a Pemex gas station on the left (northwest corner). Go straight here and look for our sign on the right, halfway through the block. Turn right into our alley and drive straight ahead for Mar Y Aventuras and Hotel Posada LunaSol. 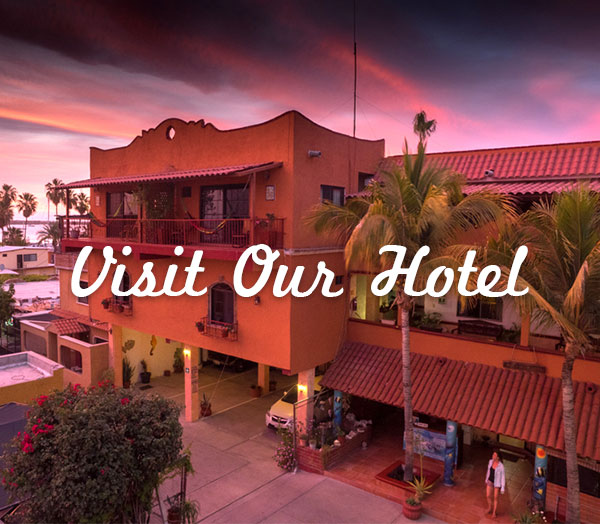